What Every Healthcare Marketer Needs to Know About Inclusive Marketing

COVID-19 has placed a spotlight on healthcare disparities, and it is hitting historically under-resourced communities disproportionately hard — in particular, people who identify as BIPOC (Black, indigenous, and people of color) in the United States. Conditions prevalent in these communities increase their risk of contracting the disease and limit their ability to receive treatment and to recover.

Life-sciences brands can take action to help resources, treatment, information, and education reach these underserved communities, which can be untapped audiences for these brands. In so doing, benefit comes not only to members of these communities, and to public health in general, but to
the brands themselves.

Marketing that accurately reflects the population matters more than ever. In 2016, the Pew Research Center found that 43% of U.S. millennials are nonwhite, and Gen Z is even more racially diverse, with a majority-minority crossover in the national population expected this year. Nonetheless, one study found that only 19% of people featured in commercials were nonwhite.

Reaching out appropriately to untapped audiences offers brands enormous potential to make a difference. And using marketing technology adeptly, and backed by the right strategy, makes it possible to improve a brand’s delivery of tailored experiences.

In this POV, we will discuss marketing to the Black community specifically; in the future, we will focus on other untapped audiences (which include but are not limited to Latinx, LGBTQ, and indigenous communities).

Background
Underserved communities like the Black community in the United States experience a disproportionately negative impact due to social determinants of health (SDHs) and potential barriers to care. This is true in general, as well as particularly now, during the COVID-19 pandemic. SDHs are the conditions in which people are born, grow, live, work, and age, and that shape our health. Addressing and improving SDHs is vital to improving public health and reducing disparities in health and healthcare.

50% of health outcomes can be explained by socio-economic factors and physical environment factors, and another 30% by health behaviors. 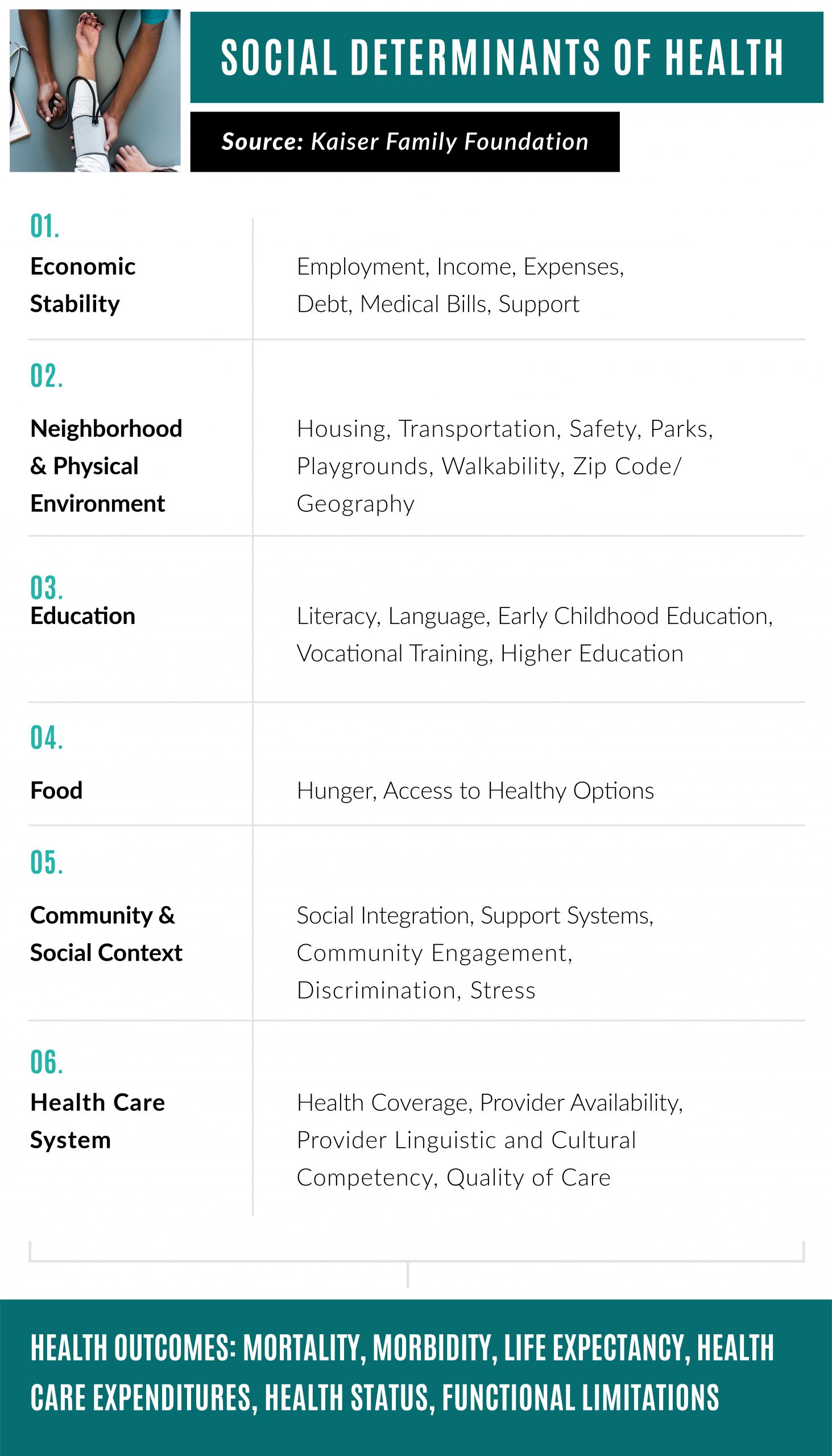 Social determinants of health for the Black community include (but are not limited to) an increased prevalence of conditions like hypertension and heart disease; a lack of healthcare coverage from insurance, Medicaid or Medicare; language barriers; and, of course, a formidable foundation for a cultural distrust in institutions of government and healthcare. A few examples and statistics illustrate how institutional racism affects healthcare for Black Americans: 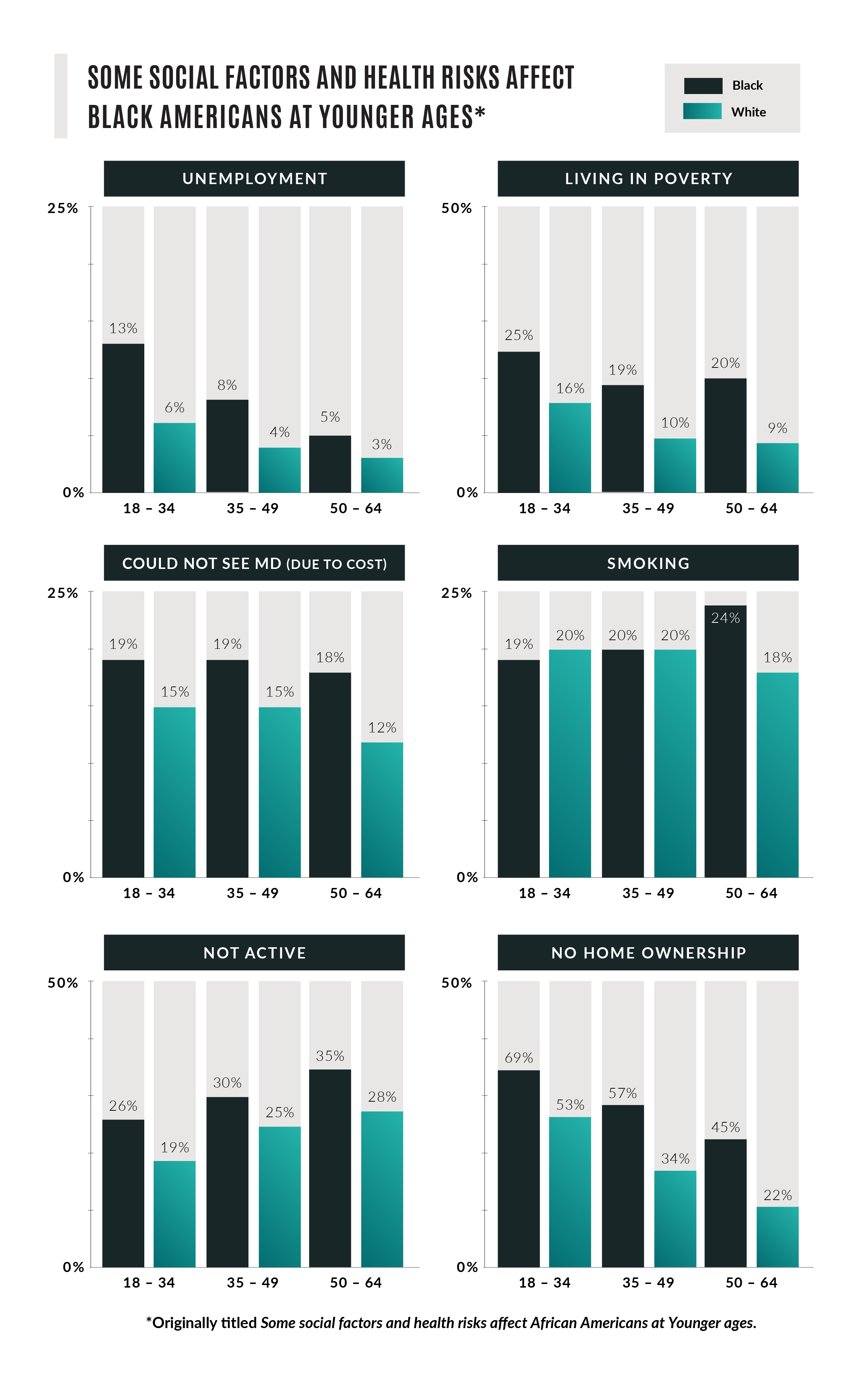 It’s not about having a committee; it’s about having the right people in the room at every point in the process.

Reaching Black Audiences
Today’s consumers (and patients) are accustomed to voting with their wallets. According to a 2018 survey of global consumers, 64% said that a brand’s position on social and political issues would lead them to either buy, or boycott, it. “This is the birth of Brand Democracy; as consumers are electing brands as their change agents,” said Richard Edelman, president and CEO of Edelman.

Yet, a 2019 survey by Adobe of more than 2,000 consumers found that 66% of Black Americans felt that their ethnicity was portrayed stereotypically in advertisements. While consumers want to give their money to brands they feel justified in supporting, Black Americans lack that sense of validation. Here are a few ways that a brand can begin to improve upon this lack.

Do the Work: Diversity From the Ground Up
Diversity and inclusion are institutional, intersectional, interwoven. It’s not about having a committee; it’s about having the right people in the room at every point in the process. It’s also about having the right external connections. Authentic, transparent interactions help to build relationships with the communities you seek to connect with. Outreach begun with digital (and analog) listening, and that moves to connecting with organizations and influencers, can be a good start.

One Mission, One Voice: Connect Siloed Activities
Close communication gaps so that different brands, departments, and agencies are aware of what’s been done, what’s being done, and what’s being planned. This could include everyone from public affairs, to corporate social responsibility, to HR, to different brands in a franchise and throughout an organization. One example of potential action: Sponsor efforts to help attract HCPs to underserved communities.

Incorporate AI to Avoid Missteps, Omissions and Unconscious Bias
As the New York Times said in late 2019, “social bias can be reflected and amplified by artificial intelligence in dangerous ways.” This can be because designers use their own lived experience, which is by definition limited. Or, it can be because machine-learning systems sometimes learn things we don’t expect, or want, them to learn as they teach themselves from data sets. (For example, if a data set of resume’s shows that people from a certain zip code are less likely to have been hired in the past, the AI might infer that that zip code should be avoided in the future.) Every step of the process should be considered to root out opportunities for error: from the algorithms that underpin AI, to the creative (are Black models used in tokenizing ways in imagery?), to targeting (How are data purchased? How are they pulled?), a solid groundwork is vital for success.

Take a Step Back: Conduct an Inclusivity Assessment
Check your data gathering. Investigate your segmentation. Are these all on-point, or could they be improved? Intouch offers an inclusivity assessment that improves your awareness of what you’re doing right and where the gaps are in your processes, and includes a multichannel marketing playbook to improve your multicultural, multigenerational outreach strategies.

Conclusion
To help members of untapped audiences get to your information (both patients, and HCPs), you must first understand the hurdles that they face: know why those hurdles exist, the extent of their impact, the daily effort that your audiences must expend against those hurdles. Look inside. Ensure diverse perspectives are taken into account. Consider an inclusivity assessment for an all-encompassing audit of your marketing strategies, specifically, to find where you can improve.

Build trust with untapped audiences by engaging honestly and humbly. Listen. Work with members of the community to learn and understand the needs. Offer to partner with experts in ways that will help their organizations and can help you continue to learn and begin to be seen by members of that community. Do the work to figure out what content can help the most to make access to prevention, care, treatment, and life easier. It’s important to remember that an untapped audience is not a new one — just a previously underserved and under-considered one. Helping patients, no matter their walk of life, and stepping up to reach and serve historically underserved populations is the right thing to do for them — and it’s the right thing for our business. It may take effort and a shift of thinking, but there’s no downside ahead.

Chanel Hemphill is a senior RM strategist at Intouch Solutions.