The SE-Oh So Familiar Lifecycle of a Google Algorithm Update

Google updates its algorithm, or the way it displays search results, around 500 times per year. For those keeping track at home, that’s more than once a day!

The majority of these updates doesn’t fall on the SEO industry’s radar, let alone receive national attention. Even fewer are confirmed by Google, and only a handful actually gets cemented with an official name. Honestly, that’s probably a good thing. Otherwise, it would be nearly impossible to keep up with actual work.

The few Google updates that do generate substantial buzz each year can cause a whirlwind of speculation, panic, investigation and drama in the SEO world. A recent Google update — its crackdown on mobile interstitials, those frustrating pop-up screens nobody likes, ever — provides an opportunity to see what this whirlwind looks like from the inside. 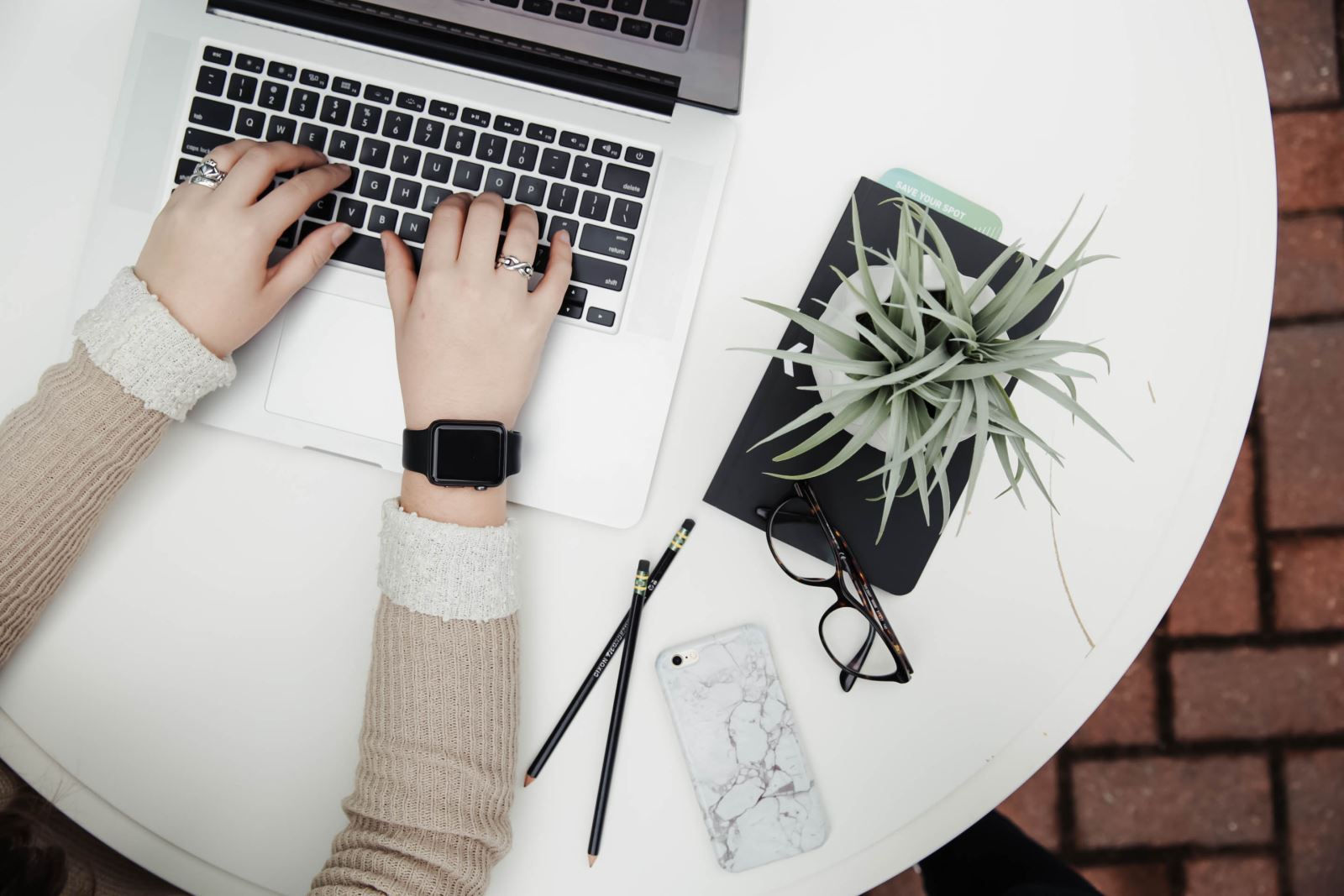 The People Speak Up

Whether some discontent is algorithmically detected or literal complaints are submitted, searchers send messages to Google every single day. When enough messages about the same issue start piling up, Google takes notice.

Our Example: In the summer of 2015, two things were on an upward trend:

After receiving enough similar signals Google runs a series of live experiments to isolate the complaint and allow the data to verify the culprit.

Our Example: Google rarely divulges much in this investigative phase, but in this instance, the company published a case study about the negative effects that app-download interstitials had on user experience.

An Update Gets Announced

Most updates go unannounced. When they are publicized, the timing spans the spectrum. Sometimes the announcement comes before the rollout to give webmasters time to adjust, like with Mobilegeddon (the update that made mobile-friendliness a ranking factor).

Other times, the public learns much later, like when we found out PageRank sculpting using nofollow doesn’t work, a full year after the change was made.

Our Example: On September 1, 2015, Google told the webmaster community that mobile sites with app interstitials “hiding a significant amount of content on the transition from the search result page” would stop being considered “mobile-friendly” as of November 1. Mobile-friendliness had been a ranking factor since April of that year.

We Look Ahead and Make Predictions

Looking back, many Google updates fall in a logical progression. For instance, first Google incorporated mobile-friendliness into its algorithm, one that heavily relied on desktop content. Now, due to the continued growth in mobile, Google is working on a mobile-first index. Crawl, walk, run. It makes sense.

But hindsight is 20/20, as they say. It can be much more difficult to predict Google’s next move. Still, it doesn’t stop us from trying.

See: “An Update Gets Announced,” above.

Our Example: Google gave us nearly a five-month cushion between announcement and rollout when it revealed that all mobile-interstitials, with a few exceptions, would cause sites to not rank as highly. Not only did this update broaden Google’s stance on interstitials, it was introduced as an entirely new ranking factor (not just an adjustment to the larger, mobile-friendly factor already in place).

We All Become Interpreters

Whenever news breaks of an algorithm update, the SEO industry scrambles to understand its ins-and-outs. They say over half of communication is nonverbal; it’s what lies in those subjective and implicit cues that helps us fill in the blanks.

Similarly, we try to layer what Google literally says with other contextual clues. This might include past Google communications, patent filings, third-party research, historical algorithm updates (crawl, walk, run, remember?) and anything else we can get our hands on.

That four-to-five month cushion between announcement and rollout allowed for two things: webmasters to make necessary adjustments and the SEO community to try to interpret this announcement down to the tiniest nuance.

When we hear the latest Google update is live, there’s a renewed urgency to summarize, verify and share within the SEO community.

This is also a time when misinformation is most prevalent. Some of this has to do with the fact that there’s likely still many unknowns. For instance, does it being “live” now mean the update has been fully rolled out across all users, queries and continents, or will it be rolled out over the course of days, even weeks?

Another reason misinformation seems to find its way into this phase is that the demand for immediate answers is at its highest. SEO journalists, like all journalists, sometimes have to choose between being first and being right. This makes it extremely critical for your SEO agency to not just blindly pass over the latest article published on the topic without adding its own context and interpretation.

Like many updates, the mobile-interstitial rollout was announced on Twitter. Initially the update didn’t appear to be making much noise as webmasters hadn’t been sharing they were penalized by this, leaving many wondering about its specific timing and potential impact.

Speculation is one thing. Data is another. Once the rollout occurs, the SEO community shifts from making predictions to finding and interpreting data points: whether in aggregate or in anecdotes. Once we have a handle on the what happened, we can shift to the what’s next. This includes updating our internal teams and/or clients and putting together plans for any necessary adjustments.

Despite how sophisticated Google is in 2017, it’s still important to discern between two parts of the search engine, the human and the algorithm. Just because a representative from Google says its algorithm will work a certain way doesn’t mean it will always work perfectly. This imperfection bubbles up more when the algorithm is trying to detect something subjective, which is exactly the case with the mobile-interstitial update.

In the original announcement, Google outlined a few examples where mobile interstitials would be exempt from this update, including:

While the first two exemptions are measurable and definitive, the last one isn’t.

How does an algorithm measure legal obligation?

This appeared to have much more to do with intent — something highly subjective —  than anything concrete. This is why, at Intouch, we weren’t surprised when Google got it wrong.

After a few weeks from the live date, there were reports of sites that should’ve been penalized and weren’t, along with sites that were unfairly penalized.

While the SEO industry doesn’t have Google reps on speed-dial like with PPC (which makes sense; we pay them nothing), there are Google staffers who will occasionally respond to inquiries. So, we reached out to one of them on Twitter.

Unfortunately, we didn’t get much detail in return. 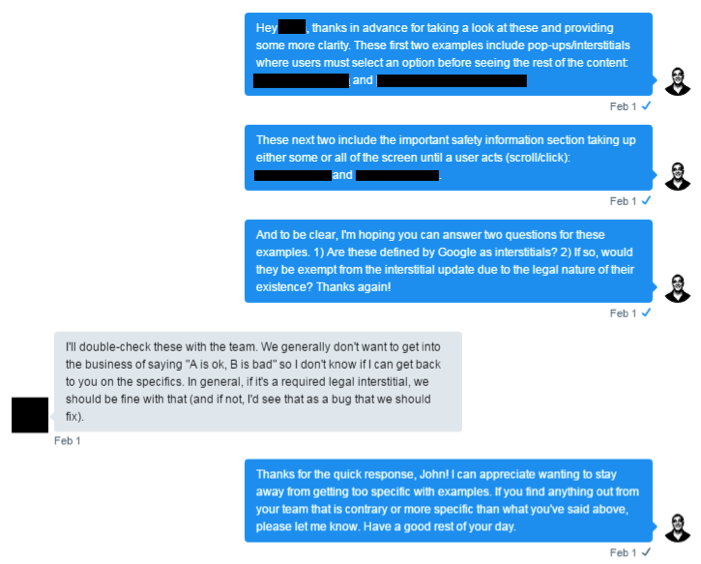 All of this resulted in Intouch’s SEO team warning our pharma clients who were using mobile-interstitials upon site entrance for legal obligations (e.g., “Please confirm you are a healthcare professional”) that a penalty was potentially in the cards. If we’d just taken what Google said at face value, we wouldn’t have provided the warning.

We Predict Once Again, and the Cycle Continues

Our Example: Since Google has consistently been moving toward a mobile-first world, we actually don’t think this interstitial penalty will get broadened to desktop users. However, we still don’t recommend them because of their UX implications, some of which can at least indirectly influence rankings. Also, why generate traffic if you’re not going to provide a positive experience?

When my wife and I are in the car and we pass a cop, our subsequent action is entirely dependent on who is driving. She glances at her speedometer, exhales in relief and keeps doing her thing. I on the other hand break quickly, even if I’m not speeding sometimes, as my heartbeat rivals a death metal song.

If Google is the cop, when choosing an SEO partner, make sure it’s one like my wife.

At Intouch, this kind of madness is few and far between, and much less intense. We do our best to avoid a cat-and-mouse game with Google. Instead, we focus on the same north star Google does: giving users what they want as it relates to our business.

We merely glance at the speedometer, exhale and keep doing our thing.