Venture capitalist and digital guru Mary Meeker, of Kleiner Perkins Caufield and Byers, presented her highly anticipated annual Internet Trends Report — which TechCrunch has called the “state of the union for the technology industry” — at the 2017 Code Conference on May 31. The annual report culls research and insights on all things innovative; from global Internet and smart phone use to social, video and voice search.

Meeker is known for her insights on tech trends, and last year, her 213-page report covered everything digital. This year, the report is a whopping 355 pages; partially because, for the first time, it includes a new, 30-page section on the merging worlds of tech and healthcare. As TechCrunch put it, “This was the first year Meeker included healthcare in her report and it shows just how much of a role tech is going to play in improving our lives going forward.”

Don’t have time to look through a 355-page presentation deck full of detailed charts and graphs? Don’t worry — in this POV, we summarize the five key tech-healthcare takeaways from the 2017 report and highlight additional trends across the tech industry. The full report can be found online here. 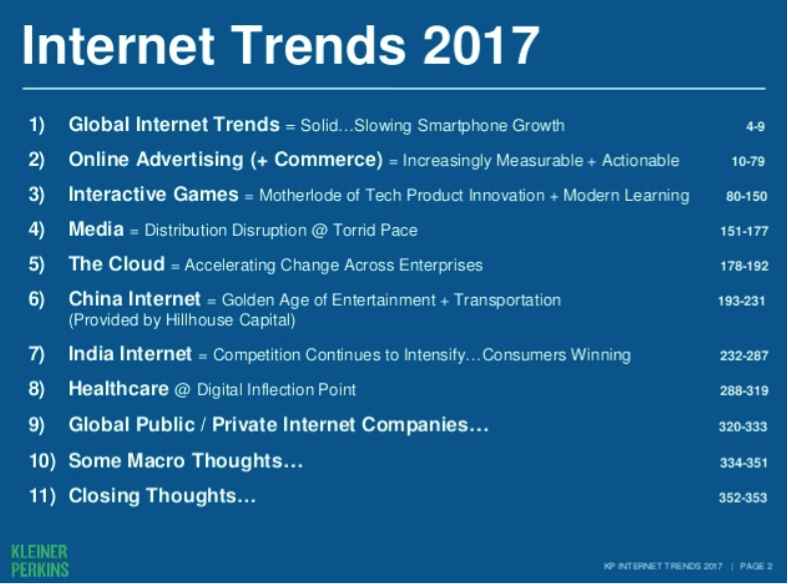 Sources of — and Access to — Digital Health Data Are Growing Rapidly

The rapid pace of tech advancements now makes it possible to gather more health data than ever.

The rise of health apps means there’s more health data in consumers’ hands — which means they have more power than ever to take control of their health and well being. Of particular interest is that the majority of health-app downloads in 2015 and 2016 occurred in countries other than the United States. Globally, the breakdown of health app categories is as follows:

Adoption of electronic health records (EHRs) among office-based physicians is also on the rise, having increased from 21% to 87% between 2004 and 2015. Data points collected via EHRs include:

And as of 2016, approximately 25% of Americans owned a wearable.

Along with an increase in digital inputs of healthcare data, the percentage of hospitals that now enable patients to access their digital data has increased, from 24% in 2012 to 95% in 2015 for viewable data; and from 14% in 2012 to 87% in 2015 for downloadable data.

In addition to the ever-growing list of devices that make data collection possible, consumers themselves are becoming more comfortable sharing health-related information. They share with family, friends and support systems via fitness apps, social media or online patient communities. And increasingly, they share with tech companies like Google, Microsoft, Apple and others.

But not all tech companies are trusted equally when it comes to the sharing of health information: A 2016 survey by Rock Health showed that 60% of respondents would feel comfortable sharing health data with Google, while only 39% would be willing to share health data with Amazon and Facebook.

Advancements like machine learning and artificial intelligence are making it possible for computing systems like IBM Watson and other simulation software to quickly gather data and predict outcomes that would’ve taken humans years to gather and calculate. Furthermore, new sources of data like DNA sequencing combined with greater information sharing in the scientific community means it’s now possible to shorten the time frame for clinical trials. 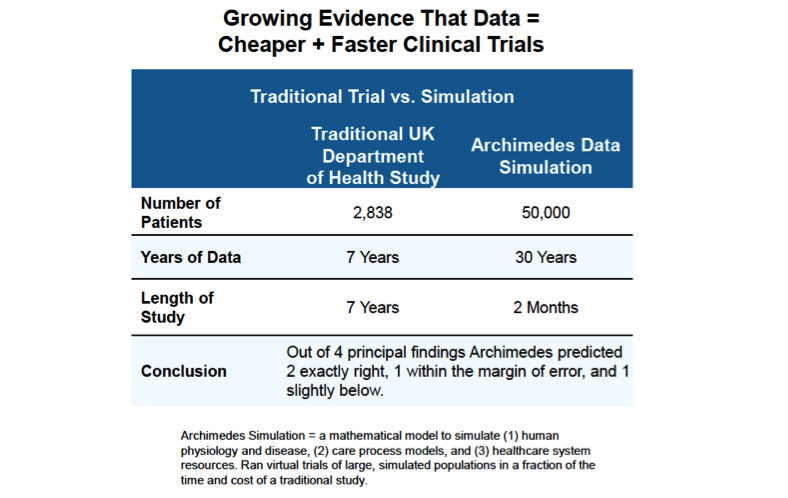 Meeker noted, and Intouch has said it before: consumers — particularly Millennials — are taking a more active role in their own health and well being than ever before. But regardless of age, everyone has come to expect quick, easy access to answers — and they’re going online or to their health apps to find them: 88% of consumers are using at least one health tool, such as telemedicine or wearables.

Consumers’ increased expectations about what their experiences should be like — and their greater access to data about their own health — are driving the pharma industry’s focus; shifting it away from brand centricity toward customer/patient centricity. The need to step away from the traditional communications model is more important than it’s ever been.

The success of empathy-building VR/AR apps like In My Eyes, which lets users see what it’s like to have three different retinal diseases, or BlueStar, the prescription-only, insurance-covered app that helps patients manage diabetes, and smart pills, which track medication adherence are only just the beginning of what’s possible in terms of enhancing user experiences. 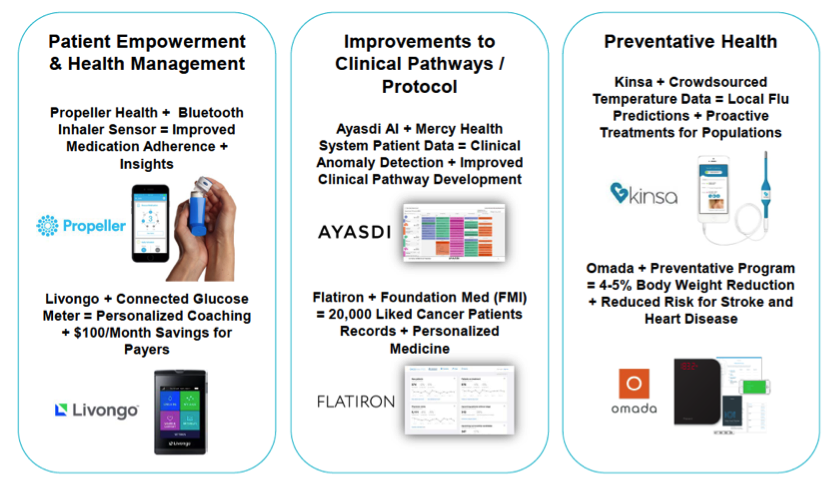 Genome Sequencing and Analysis Is Moving Faster Than Ever

In 2008, there were only five personalized therapies; in 2016, there were 132. As more genomics technologies emerge, research can intensify, sequencing and analysis can happen faster, and more treatments can be customized for each individual’s condition.

Despite questions about how physicians, payers and patients might handle computer-generated recommendations from the likes of IBM Watson, and despite setbacks like the one seen when the IMB-MD Anderson partnership to end cancer was placed on hold, we’re now closer to healthcare solutions than we’ve ever been.

Non-Healthcare Tech Trends Continue to Evolve
In addition to Meeker’s first-ever summary of digital health trends, the full Internet Trends report delves deep into trends from other areas of technology. Below is a summary; view the full report for details.

As advertising becomes easier to avoid with the help of streaming services like Netflix and Hulu and ad blockers, ads are becoming pervasive in other ways.

On the whole, opportunities for advertising have exploded, from product listings on Google, to Facebook contextual ads, to targeted “pins,” to local advertising that drives customers to brick-and-mortar shops, and even “in-ride” (Uber, taxis) and “in-hand” (coffee cup) media channels. Three-hundred-sixty-degree advertising is the new normal.

When it comes to Internet ads, Google and Facebook reign supreme, representing 85% of ad revenue growth between 2015 and 2016. Digital advertising is expected to surpass TV this year, yet pharma continues to spend 70% of its ad dollars on television.

Despite the growing opportunities, some advertisers — not just pharma — find measuring ROI challenging. Some don’t want to measure at all, because they don’t like the results they get. But programmatic, data-driven platforms are rapidly improving, and targeting is becoming more accurate, making ROI easier to measure.

Smartphone shipments have slowed while Internet use grows; yet the shift to greater mobile usage continues. Meeker noted that U.S. adults now spend more than three hours per day on mobile Internet use. And although ad growth is driven by mobile, there remains a gap between time spent on mobile and ad spend — people spend 28% of their media time on mobile, but that platform gets only 21% of ad spend.

“A lot of the future of search is going to be about pictures instead of keywords.”

It’s no longer necessary, Meeker noted, to type a search query. Tools like Google Lens make it possible to snap a photo and use the image for search purposes. Twenty percent of mobile search is now done by voice, and voice recognition is getting better and better. Pharma has even begun to experiment with voice technology’s potential to help patients.

The nature of social media has driven demand for higher quality, better customer support, and increased transparency — all areas in which pharma can improve.

One social feature that’s seeing increased implementation is “click-to-chat.” As we noted late last year, the use of chatbots is on the rise. Users have started to spend more time on chat/messaging apps like WhatsApp and Facebook Messenger than they do on social media platforms, and many companies are developing chatbots that function like customer service reps within those apps. Some pharma companies have experimented with chatbots, but they are the exception, not the rule.

If there is one common theme throughout the 2017 report, in a word, it is data. Consider this: a typical 500-bed hospital generates 50 petabytes of data from apps and databases to tablets and mobile devices. A petabyte, by the way, equals a million gigabytes or 1,000 terabytes. That’s a lot of data.

The proliferation and availability of data is driving everything … outcomes, efficiencies, possibilities, revolutions.

Annually, Mary Meeker’s presentation on “Internet Trends” is highly anticipated, and no doubt the report continues to serve throughout the year as the go-to for digital research and insights all in one place. The 2017 focus on digital health validates the exponentially increasing role tech is playing in healthcare.

The question remains, however, if the pharma industry is tracking with this trend.