Skip to content
Home/Intouch Culture/An Award and a Plea for Greater Understanding
April 28, 2017

An Award and a Plea for Greater Understanding

Late last week, Intouch Solutions received an award for something we never would have wanted to happen.

In February, Sunayana Dumala, a database developer at Intouch’s Kansas City office, lost her husband, Srinivas Kuchibhotla, when a man shot and killed him at an area restaurant in a senseless act of hate. (Read more about the incident here.)

Even those of us who didn’t know Sunayana personally were stunned and shaken — she was one of our own. In the days that followed, and in the face of unfathomable loss, Sunayana spoke to the media, attended events and shared her heart with bravery, determination and grace. She impressed and inspired us all. 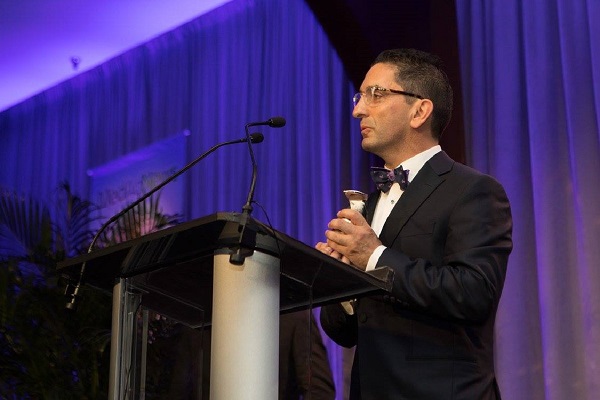 “While most often, we compete,” Faruk said to a room full of leading healthcare agencies, “at certain times, we all need to just be humans.” He also shared this thank-you message from Sunayana:

Thank you very much for this recognition!!! I’m privileged to receive this honor.

Thanks to Faruk and to my entire Intouch family for coming forward to support me and encourage me in my fight against hate crimes. I feel this is just the beginning of a greater responsibility towards achieving my goal of spreading unity and love.

A person can have his or her own apprehensions and perspectives. But that does not give them the right to take an innocent person’s life.

Because of one person’s misconception … a mother lost her child, a father lost his support system, a brother lost his partner in crime, a wife lost her other half, friends lost their dear buddy, a company lost its most valuable employee … and nothing can fill the void that has been created.

Srinivas was the epitome of optimism and positivity, and always believed in hard work, discipline, care and friendship. He absolutely did not deserve a death like this.

It is for this reason, I feel, his sacrifice should not go in vain.

I believe we all must join hands to spread messages of Unity, Love, Tolerance and Empathy, and to make this a safer and better place for future generations.

Thank you all once again. I am sorry I can’t be there in person. Know that I am there in spirit.

Our Diversity Makes Us Stronger

Intouch Solutions itself is proud to be made up of a diverse culture of different religions, races, backgrounds and ethnicities. Our founder and CEO is an immigrant from Istanbul, Turkey, who became a naturalized U.S. citizen. We celebrate diversity, and we condemn all hate crimes.

We want to thank Med Ad News and the entire medical marketing community for recognizing Sunayana at this year’s Manny Awards. Even though it’s an award we would never have wanted to win for this reason.

And we echo Sunayana’s plea for us all to “join hands to spread messages of Unity, Love, Tolerance and Empathy.” Today and every day.