Skip to content
Home/Intouch Culture/Andrew vs. Magnus: My Game Against the World Chess Champion
October 21, 2016

Andrew vs. Magnus: My Game Against the World Chess Champion

At Intouch, we’re proud to work alongside some really smart people. Andrew Grojean, social media marketer extraordinaire, is one of those really smart people. He recently had the opportunity to show off his smarts in an exhibition game with the world champion of chess. Here’s the story from his perspective.

One night three years ago, in a bout of insomnia, I went down a YouTube rabbit hole. Videos about the Kansas City Royals led to obscure sports highlights, and before I knew it, I was watching a video from 60 Minutes about the “Mozart of Chess.” The segment followed a grandmaster named Magnus Carlsen — only 21 years old at the time, but already the highest-ranked chess player in the world. That 10-minute segment renewed my interest in a game I had only played as a kid with my dad.

Little did I know that, in three short years, I’d be playing against Magnus himself in New York City.

Last year, I downloaded an app called Play Magnus, created by (you guessed it) Magnus Carlsen, which pits you against the world champion at various ages. Play Magnus held a year-long contest with people all over the world to earn rating points in the app, with the promise that the highest-ranked users would have an opportunity to face Magnus. To amass as many points as possible, I played about three games a night in the beginner section of the app. Upon the conclusion of the contest, I ranked in the top 100 for three different age groups.

When I got the call from Magnus Carlsen’s agent, it didn’t seem real. Magnus’s team offered to fly me to New York City, where — in November — Magnus will defend his world title for the second time.

In the weeks leading up to my game, I played many games with friends, set up a chessboard near my desk to play coworkers, and learned more opening positions than I thought possible. (Fun fact: I’ve since learned that there are more possible chess games than there are atoms in the universe.)

Magnus is the Usain Bolt of chess, so it was intimidating to step up to the board. Thankfully, I had a lot of support from friends and family ahead of our showdown. Though I knew my odds of beating Magnus were about as good as beating Usain in a footrace, I was stoked for the opportunity to try.

THE EVENT
The day before my game, I flew to New York with a few Intouchers who were headed to the #ALLin Accelerator, a think-tank-type event Intouch was hosting in the city. Small world! 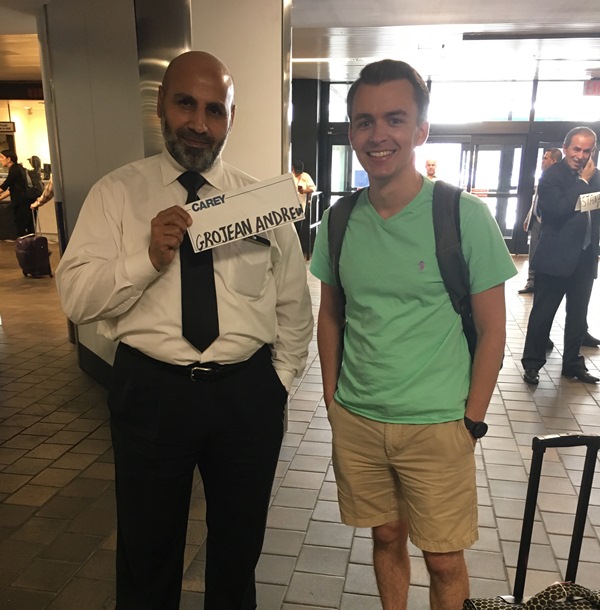 When I got to the hotel, I met up with the other winners of the Play Magnus Live Challenge. I would be participating in what’s called a “simul” or simultaneous exhibition, where someone (Magnus) plays multiple games at the same time. Eleven people were selected for the simul from seven different countries: USA, Norway, Austria, Canada, Germany, Spain and the Bahamas. I got to officially cross off “Represent Team USA in something” from my bucket list.

I also went to the premiere of Disney’s Queen of Katwe. After the movie, there was a Q&A panel with Magnus; the actors; and Phiona Mutesi, the young woman who inspired the movie.

We began the day of the event with a brunch attended by chess royalty. In addition to Magnus Carlsen, Fabiano Caruana (USA’s top player and third-highest-ranked in history) was there. I got to watch two of the greatest ever go head-to-head — every chess nerd’s dream.

I never shy away from a camera, so I volunteered to speak to the ABC affiliate in New York about the event, then I made my way to the Liberty Science Center stage. Norwegian news outlets VG and NRK covered each of our boards and provided grandmaster commentary as the simul progressed. The event was being broadcast on Norway’s government-owned news channel (their BBC) in primetime, as well as major chess websites like chess24 and ChessBase and several Facebook live streams.

With a few million chess fans and the entire country of Norway watching, the game began. Magnus made his way around the 11 boards, shaking each competitor’s hand with a smile. 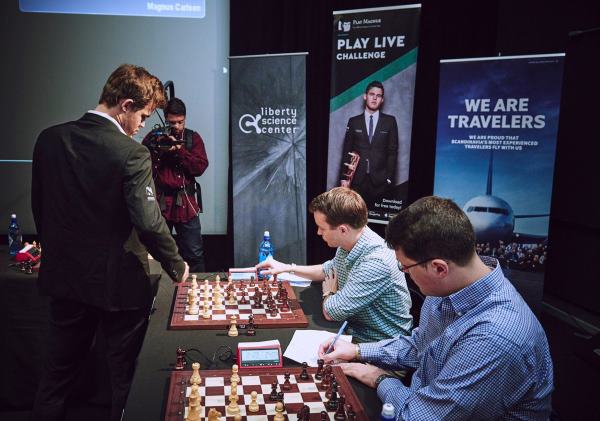 When we reached the mid-game and it was apparent I was in trouble, I set up my pieces to attack his king. After move 20, we each had checkmate in one move, but my attempts were futile, and Magnus beat me to the punch. We shook hands after nearly 40 minutes of intense chess.

My goal going into the game was to last at least 10 moves, since Bill Gates only lasted nine moves against him in 2014. I’m proud to say I was able to last 21 moves against the world champ.

For those interested, I’ve notated my game with Magnus and included commentary on my thought process here. 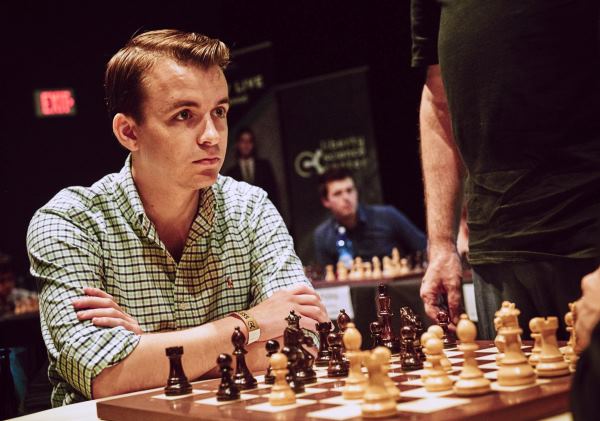 Magnus and I had a few minutes to chat off-camera after the event, and I told him he was the reason I started playing chess. We chatted about scenes from famous chess movies, and he offered encouragement to me as a chess novice. I can’t wait to play friends in the future and tell them “Magnus Carlsen taught me that one…”

Later that night, I was invited to a cocktail party hosted by the Norwegian Consulate General at her penthouse in downtown New York. I shook hands with Norwegian dignitaries and met a few more grandmasters.

I got to end the night unwinding with Intouchers after the #ALLin Accelerator. I’ve had some great experiences in New York when I’ve met up with Intouchers, and this time was no exception.

The day I played my chess idol Magnus Carlsen was one of the greatest days of my life.